1. Any of a group of British workers who between 1811 and 1816 rioted and destroyed labor saving textile machinery in the belief that such machinery would diminish employment.
2. One who opposes technical or technological change. 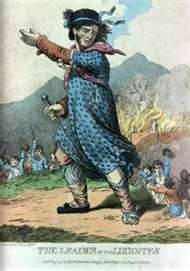 anyone familiar with crankpunk will know that amongst the things i dearly love, such as Yorkshire Tea, pygmy horses, peeing in the sink and the sensation of a new sponge against my teeth is included the art of blatant name dropping. one of my favorites is ‘i remember when i was shucking oysters with Nelson Mandela and Whitney Houston…’ – whether true or not is besides the point. if you build it, they will come, one of America’s greatest all-time exports once said.
shifting sands, as we all know, are the solid foundation upon which all empires are built – just ask LA about that one.
where am i going with this? well, i remember a few years ago hearing from a guy who knew a guy who knew our current World Champ, Mr. Philippe Gilbert, who rode with him from time to time. this guy told that guy who told the other guy who then told me that Gilbert never trained with a powermeter, nor, usually, even with a computer, and that he had no coach  – which is the same way i train. but i still couldn’t quite believe it. i mean, look at his results, and he’s riding against guys who have thousand if not millions of dollars of research and analyses behind them. 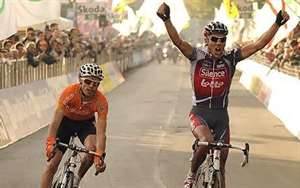 i might be doing OK at Conti level but for someone to adhere to the Luddite Way at ProTour level? i just wondered if it wasn’t part of the building of a mystique. and then, a year or so later, i saw this in Velo Magazine:

Velo Magazine: Do you have the feeling of being and old style rider?

Philippe Gilbert: No, then I would not get any result. But it is true that I train mostly by feeling. In the team (Lotto), we have Powertap but I do not use it. I do not even have a heart rate monitor, but I always know where I am. I never analyze my training with the computer or graphics. I have not got a clue about how many watts I produce in a climb. That is totally unimportant. What you have to check is how fast you are moving, and the difference you do in relation to other.

i rode with Gilbert in the Tour of Qatar this year (*name dropping alert*) and found him to be a very decent chap. one day we were sat mid-pack chatting about traveling as we drew closer to a parked up, open-back truck. taking out his empty bidon, he tossed it high in the air over the peloton and straight into the truck. ‘SLAM DUNK! WHOOOO!’ he yelled. ‘hey, did you guys see that?!’ he asked, turning to the other riders with a big goofy grin on his face. we agreed that it would be a good idea if the organisers of less-exciting races could have large hoops along the course, where riders could try to throw their bidons into – a successful toss would be rewarded by a time bonus. good idea eh? the Vuelta could be transformed…

anyway, i never got round to asking him about his training method, something i regret. recently though Gilbert once again reiterated his belief in training by ‘feel’, even going so far as to blame his poor early season form this year on allowing his BMC coaches having him adhere to ‘numbers’:

After that first team training in December 2011 I was dead. I respect the process of my bosses, but I’ve learned to talk. I’m an old rider. I’m too old to change now. I’m not interested in numbers and values. A cyclist is not a Formula 1 driver who gives all numbers of the machine to engineers after testing and then there is a solution.”

i’m not about to chastise riders who use heart rate monitors and SRMs and the like. i’m sure Gilbert is in the minority amongst World Tour guys in eschewing modern technology, and that for every Gilbert there are 8 or 9 Wiggos and Froomes. i also make a living, directly and indirectly, by cyclist-consumers buying stuff and being eager to improve by reading training articles and the like.

but there’s a truth to what i’m about to say which is news to no one: the manufacturers of all this stuff want you to believe that in buying their product you will go faster. they want you to buy it, period. how many actually use the product in the correct way, analysing and logging the data, pouring over the numbers, well that’s another thing. i’m sure we all know people who have bought the power meter cos they think it means they’re pro but who never actually use the data in any scientific way.(i actually was sponsored by SRM for the 2010 season. the consol;e had a gremlin or two in the first month, and i never got it fixed. i’d had one session before that, trying to hit a designated number for 30 minutes, and it just wasn’t for me. it wasn’t cycling, it was more like a school project…) 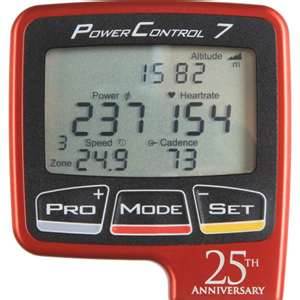 the reality is that you don’t need all these gadgets to go fast. what you need is good, solid training, timing your rides over specific routes and distances, an understanding of your own body, and a back pocket full of realistic expectations, not daft impossibilities. most cyclists, like myself, are secret shoppers – we’d never stroll for hours round a mall but get us in a bike shop or an online store and we could spend thousands.

just about every coach i know swears by power meters. but, whilst a powermeter can be great in telling you where you are after a training block and is perfect if you’re a data-loving number cruncher, there are drawbacks. the first is that not everyone is built to follow numbers and the strict methods that they demand. it can kill the passion. the second is that, buy relying on watts and heart beats, the rider begins to lose contact with his or her connection to their body. the numbers don’t lie, the old saying goes.in the case of watts this is true. but some riders adhere to the numbers too much. i remember a guy on my team who would drop off the back of races, day after day on the tours, in the last 4 km.

‘what happened? you dropped again?’

‘i felt ok but my hear rate was way high…’

this is an extreme example of how you can lose the sense of the feel. relying so heavily on the numbers had this fit, healthy 23 year old thinking he was about to have a heart attack. lordy, i’m 40. if i believed the numbers like he does i’d be in bed with a cocoa and a hot water bottle rather than racing in international stage races…

one team coach told me that with a power meter he could get an extra 5% out of me.

‘but you’re gonna kill me with the numbers.’

‘if i have to ride all day looking at my computer, and indoors too, my soul’s gonna die.’

but i wasn’t. the point is that these things work for some, but not for others – and, i’d say, they don’t work for most. having a power meter makes you coachable, but as with Gilbert, it might just not be what you need.

as ever, forever, let us all crank on…