It was with a heavy heart that RCS Sport, the organisation that runs the Giro d’Italia, announced the postponement of the 2020 edition of the Italian Grand Tour due to the CoVid 19 corona virus. At the time of writing, there was yet to be an update on exactly when the Giro would be held this year, if indeed at all.

Therefore, in lieu of a pre-race analysis this year, we bring to you a brief history of the Giro d’Italia.

Fans of the Giro d’Italia can thank the Tour de France for providing the inspiration for the Italian race. Across the border, Henri Desgrange, editor of L’Auto newspaper, came up with the idea of a national cycling tour in a bid to boost sales of his publication in 1903.

Back in Italy, the editor of a newspaper called La Gazetta dello Sport, Tullo Morgagni, well aware of the success of the Tour de France, decided that his paper should organise an Italian tour. However, the owner of the newspaper, Emilio Costamagna, lacked the funds to sponsor the race. So, Morgagni consulted Primo Bongrani, an accountant at the Cassa di Risparmio bank and a friend of his. Bongrani proceeded to go around Italy asking for donations to help hold the race. Bongrani’s efforts were successful, and he procured enough money to cover the operating costs.

The Giro d’Italia was suspended from 1915-1918 due to the First World War, then also during the 2nd World War.

As with the initial idea for the race itself, the colour of the Giro’s leader’s jersey also came from the Tour de France. As Le Velo was printed on yellow newspaper, Henri Desgrange decided that the winner’s jersey should also be yellow: and thus, one of the most distinctive jerseys in all of sport was born.

The Gazetta dello Sport was printed on pink paper, and thus, Morgagni decided that the leader’s jersey should also be pink. The jersey is known as the ‘Maglia Rosa’, meaning ‘pink jersey’ in Italian. The race leader is also known as the Maglia Rosa. The first ever jersey was designed by Vittore Gianni, who had designed the jerseys for the football teams AC Milan and Juventus. Dolce & Gabanna and Paul Smith have also designed the Maglia Rosa in recent years.

Italy has produced some of the finest cyclists of all time, there is no doubt about that, however the true Golden Years were from the early part pf the 20th Century up to the mid-50s. From 1920 to 1953, quite amazingly, the winners of the Giro were exclusively of Italian descent.

The dominant figure of the 1920s was Alfredo Binda, who was the first man to win 5 Giros. His first win came in 1925 and was deeply unpopular in Italy, as the 23 year old Binda had beaten the legendary and hugely popular Costante Girardengo, in what was supposed to be his last race. In 1930, the utterly dominant Binda was called to the Gazetta offices and offered 20,000 lira to be less dominant- he refused. Binda would later go on to manage the Italian National Team and is recognised as one of the greatest Italian cyclists of all time. 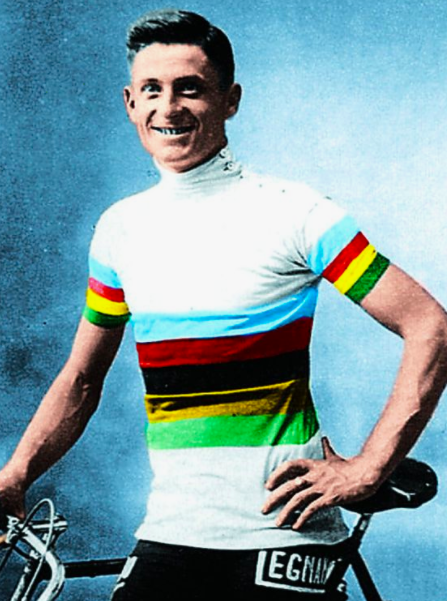 Binda in the Rainbow Jersey

It took a near-superhuman to knock Binda off the podium at the Giro, and that man was Gino Bartali, famed for his endurance and steely mind. Bartali won the Giro in 1936 and 1937 and had it not been for the 2nd World War, he’d likely have won more than the three he eventually did.

It was Bartali’s misfortune that there was another incredibly talented rider around at the same time, a man widely regarded as Italy’s greatest every cyclist, Fausto Coppi. It was Coppi, then only 20, who defeated Bartali in the 1940 Giro (Coppi was a teammate of Bartali at the time).

Bartali would win his last Giro in 1946, with Coppi winning in 1947. Coppi won another three and in 1952 became the first cyclist to win both the Tour de France and the Giro in the same year. But what these facts can’t begin to explain is the way that the Coppi-Bartali rivalry gripped all of Italy. Bartali was of the rural South, a conservetive and a Cathiolic, a former boxer who looked like, well, a former boxer.

Coppi on the other hand was all elegance and style, frailer than his rival but a man who lived for the love of life, champagne, gorgeous sports cars and beautiful women. The two had a begrudging respect for each other but were polar opposites, and in Coppi, Bartali met a rival who was wilier than he, wildly charismatic and faster. Even now in Italy you will till see images of the two men not only in cycling shops but all manner of stores, cafes and private homes.

You can also spot names of both men writ large in white paint on the roads of the Giro.

“If you look at the statistics”, said former professional ride Marco Pinotti, “Coppi won more races but Bartali lost his best years to World War 2. People are still debating which one is better. In Italy, they still have that conversation at dinner. We learn about them at school. They gave people hope.”

It would be askew to not mention one other area in which the two men differed, and that is their attitude to La Bomba. No, not the song by Rithie Valens: La Bomba was a cocktail.of caffeine, cola and amphetamine pills favored by Coppi, something he openly admitted using. Bartali on the other had preferred to drink up to 28 espressos a day. and was known to break eggs on his handlebars, letting the albumen fall to the ground and eating only the yolk.

Coppi & Bartali at the Tour, 1949. One of the greatest images in cycling IMO.

Finally, in 1950 the Italian grip on the Maglia Rosa was broken. The man who managed this was a Swiss rider, Hugo Koblet, who then went on to win the 1951 Tour de France. However, Koblet’s remarkable power deserted him after 1951 with seemingly no cause, and despite seeing several specialists and doctors, it never returned. He disappeared to Mexico and died in a car crash aged just 39.

He was however, by all accounts, a true gent. Rene de Latour wrote in Sporting Cyclist magazine: “Koblet had not an enemy at all. His ready and kindly smile came from deep down inside, and one knows from the start that this was a man without rancour, a rare thing to say of anybody who has raced in top competition on the road where the intense physical struggle often leads to jealousy and dispute.”

In the 1970s there was one rider who not only dominated the Giro but also just about every race in the world: Eddy Merckx. The man from Brabant, Belgium is widely regarded as the greatest male cyclist of all time, and he dominated the Italians and everyone else at the Giro, winning in 1968, 1970, and then again in 1972, 1973 and 1974, a hat-trick of consecutive wins that has never been repeated.

Andy Hampsten of the USA was the first winner in 1988 [see next article], and Nairo Quintana of Colombia the first South American winner in 2014. The last Italian to win the race was Vincenzo Nibali. The 2019 winner was Richard Carapez of Ecuador and the Movistar team. [Merckx famously won 5 Giro d’Italia and it would have been 6 had he not been busted for amphetamine: Podium Cafe have an article on this debacle here.]