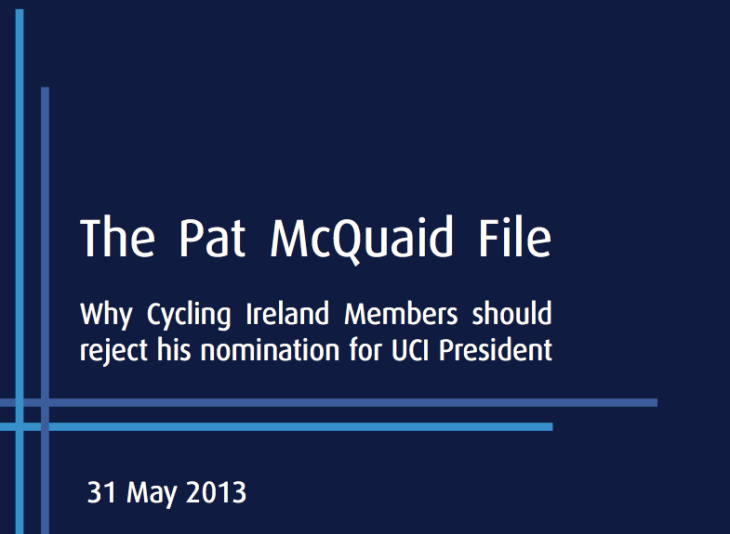 you will no doubt be aware of the recent rumblings concerning the nomination of the UCI head honcho Mr. Pat McQuaid, who in his quest to grab another term as president of the beloved world governing body of cycling is causing divisions within the sport. and when i say ‘body’ it is very nearly in a literal sense, so close is the thing to a corpse.

McQuaid seemed on course to clinch the presidency again when Cycling Ireland’s board voted to back his bid for a third term in office. however, one member of that board, then vice-president Anthony Moran, voted in opposition and later resigned from Cycling Ireland in protest. Moran was part of a group of Irish cyclists and UCI members who then persuaded the board of Cycling Ireland to put the nomination of McQuaid to a vote by the members of Cycling Ireland at an Extraordinary General Meeting, which will take place this Saturday, the 15th of June.

by that time of course, McQuaid was already off to Switzerland to garner their cycling federation’s nomination for the presidency, a nomination that may or may not be unlawful according to the UCI’s own rules. McQuaid recently sent an open letter (all the rage it seems these days) to the member clubs of Cycling Ireland to address the EGM and give his own opinion on his nomination by the Swiss Federation.

“Whatever happens at the Cycling Ireland EGM this week,” wrote McQuaid, “my nomination by Swiss Cycling will stand. Cycling Ireland is not permitted to cancel the EGM that it has called and a small group of activists who have been manipulated by commercial interests have sought to mislead and convince anyone who will listen that this is a defining moment in my election campaign. It is not.

“Any suggestion that my nomination does not comply fully with the UCI rules is untrue, deliberately misleading and disingenuous. The rules have been followed to the letter. The latest challenge to my Swiss nomination is completely baseless – it is just one more shameless and confected PR stunt by a company and individual who have sought to hijack the UCI Presidential election to turn it into a global PR and marketing campaign for himself and his company.”

well, if anyone understands the meaning of “misleading” and “disingenuous” it is certainly McQuaid, the ex-rider who rode under a false name in South Africa in the Apartheid era, and who later claimed this in regard to LA and the allegations of doping: “my experiences as a cyclist convinced me he was real.”

definitely real, but definitely not clean. and any rider I know that is worth their salt knew LA was juiced from the get-go.

that sentence alone has disingenuous written all over it.

not to mention this one: “[a] shameless and confected PR stunt by a company and individual who have sought to hijack the UCI Presidential election to turn it into a global PR and marketing campaign for himself and his company.” well, takes one to know one, as they say…

Moran is also one of 5 authors of a recently published document, The Pat McQuaid File, along with Dr. Conor McGrane, Paul Atkinson, Mark Gill, Dr. Cillian Kelly and Kieran Kean. The Pat McQuaid File sets out the group’s opposition to McQuaid and is essential reading for anyone interested in this case. earlier this week I chatted with Conor McGrane to get his take on the whole case and to delve into a few of the issues brought about by the document.

one of the central points of the file points out the ‘conflict of interests’ inherent in having a world governing body that was seeking to promote the sport as a financial venture that was also in control of the anti-doping initiatives. why, you have to wonder, had no one ever really highlighted that conflict before?

“There’s obviously been a turf war between the UCI and WADA in terms of being in control of the anti-doping,” says McGrane. “We have concerns about the UCI being in control of it because they effectively run a lot of races and are trying to globalize the sport, and are in control of many of the doping controls. The media – well it is hard to know why these questions weren’t being asked by more people, earlier. The mainstream media just didn’t publish these questions and in a sense they hid their heads in the sand.”

but what about the initiatives that the UCI brought in, such as the Biological Passport, surely the UCI’s crowning glory?

McQuaid was quick to highlight this in his letter to the Cycling Ireland members. “During these eight years [as president of the UCI], I have introduced a whole host of initiatives in the UCI to create an environment where today’s riders can now compete and win clean.”

but Moran’s take on this is a little different and he is critical of the reach, scope and implementation of the Passport, and of the general lack or accountability in the UCI.

“It’s an organization that needs deep rooted reform. It needs to be more accessible and more open to members and federations, to allow them to express their concerns. Their reaction to all the doping scandals, they’d reacted after but never initiated a response. The Bio Passport hasn’t been run in a way that would allow it to achieve what it is capable of.

“Whenever you criticize the doping in the sport the UCI bring up the Biological Passport, but it’s only there at the highest level of the sport and even then its results have been patchy at best.”

there is no doubt that, apart from McQuaid and his predecessor Hein Verbruggen, who is Honorary President of the UCI, the organisation is largely a faceless structure and that it is very difficult to work out just who is in charge of what, which leads, McGrane feels, to a lack of democracy and responsibility. though the file is very much focused on the role of McQuaid within the UCI, I was interested to take in McGrane’s views on Verbruggen, the man who revamped the organisation in the 90s and who groomed the Irishman as his successor.

“Verbruggen really has no place in cycling and no place in sport,” began McGrane. “What he did in his presidency was literally appalling. The thing that stands out was his bringing in of the 50% rule for heamatocrit. That effectively legalized EPO use.

“A normal level is between 38 and 44%, occasionally 46. Then all of a sudden, that rule comes in and riders are hitting the high 49s. I’m 19 years as a doctor and I have been in cycling for 9 years now and I’ve seen only one natural level above 48%. Then I see the numbers from the late 90s and they are 48.7 and 48.9. These go against all evidence which says that these levels should in fact drop in the course of a stage race. That rule alone took away any chance of drug-free competition for at least ten years.”

but are we being naive to believe that traditional sporting values and big money can co-exist? should we not, as some suggest, just let them dope and get on with it? and what exactly are the 5 authors of The Pat McQuaid File getting out of this? are they, as they have been referred to, in fact nothing more than “a minority of political activists”?

“There always will be cheating. But we have to aim for a completely drug-free sport and it is largely achievable,” replied McGrane. “You bring up questions and they try to change the subject and make you out to be a little bit of a crank and being anti-cycling, which the 5 of who wrote this certainly aren’t. We are heavily involved in the sport and largely on a volunteer basis. We have no financial interest in this. We do it basically because we love it.”

I do wonder though, from time to time, where the riders are in all this. yes, some sent out tweets last week when Santambrogio tested positive and Acquarone criticised both the younger man and Danilo Di Luca for doping, but where are the voices from the peloton and from the teams’ management, commenting on the general situation and the UCI’s lack of initiative? do they not have to also take some greater responsibility?

“I think it really is up to the authorities,” was McGrane’s reply. “Teams are essentially there to allow riders to win races and to work for their sponsors, and if you leave anti-doping up to them then it is just not going to work. It’s great to have teams that are ethical but it is the leadership of the sport that has to take control.”

“Well, every whistleblower to date that had come out has been ridiculed and even called a “scumbag.” Verbruggen suggested Landis go to a psychologist just for saying things that turned out to be true.  And these are the high profile guys, so what chance do the other guys who are struggling to make a living have? It’s not fair to expect these guys to take on the obligation of enforcing the rules of the sport when the UCI has such a record with previous whistleblowers.”

this Saturday, the Cycling Ireland members will vote at this truly extraordinary Extraordinary General Meeting on whether or not to nominate McQuaid in his bid to become the President of the UCI for a third term. it is a crucial moment, not only in terms of McQuaid’s actual bid – he may well gain Swiss cycling’s vote – but in terms of what it represents. if the vote is not in favor of the bid it will be a landmark in the history of the sport, and indeed in any sport, a moment in time when the rank and file, the every day cyclist and club member, stands up and makes themselves heard. and, whatever happens in Switzerland, it will be a massive blow to whatever integrity Pat McQuaid has left.

how confident is McGrane of getting the support they desire?

‘So far the clubs that have been in contact with us have been supporting us and several clubs have had internal votes and the numbers are suggesting 70, 80 and even 90% against him. We will have to see on the day  but the feedback from the members is suggesting that McQuaid is not seen as being good for the sport and not the right man for the sport.”

I have been one of the commentators calling for a brand new organisation to take over the running of the sport, but McGrane points out the potential folly in that, stating that in most other sports where a rival organisation has been set up, things have rarely, if ever, gone smoothly. and you can be certain that if Pat McQuaid is in power and a new organisation does emerge, the resulting battles will not be pretty.

McGrane paused a moment before he finally spoke, considering his answer carefully.

“The UCI does have a place in the sport,” he says. “But It needs complete reform and re-organisation. In its present form though it is not fit for purpose.”

we shall see very soon what the members of Cycling Ireland have to say on that one, and on their countryman who sits, for now at least, at the head of world cycling.