Velocite is a bike brand located in Kaoshiung in southern Taiwan, headed by husband & wife team Victor and Jessica Major.

I got to know Victor thanks to my racing here in Asia and my time as the editor of CyclingTime.com, and I’ve tested as few of his bikes over the past four or five years, with the Velocite Magnus being the stiffest bike I’ve ever ridden bar none. Word from Victor though is that this one is even stiffer (see the full press release at the bottom of this post). 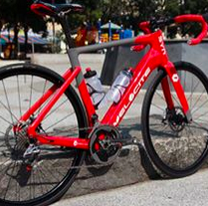 Victor just sent over these images if his new Syn frame, all built up and ready to go. Thoughts? Personally I think it looks really good. Liking the paint-job too.

I’ll be getting one of these to review as soon as I can, stay tuned for that.

You can get hold of one too, if you’re lucky!

Victor says:  “If you would like to be one of the first to try the Velocite Syn, and be a part of our live testing program contact us either via Facebook or on service@velocite-bikes.com .” 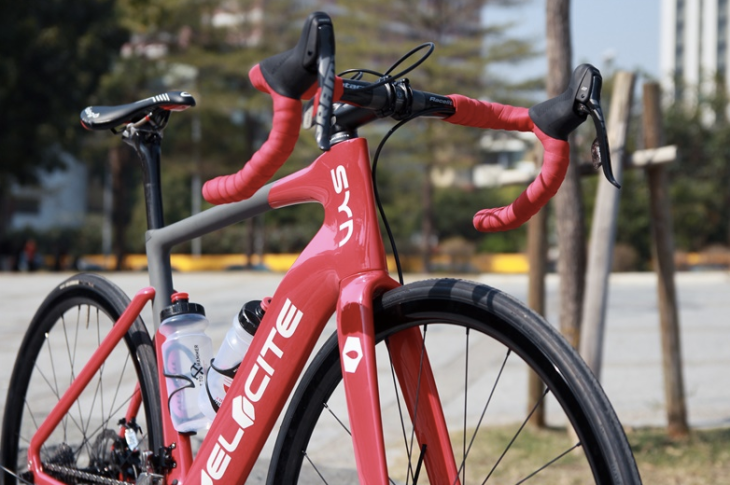 To read the full press release, please click below.

Kaohsiung Tuesday, February 10, 2015. The patent pending Velocite Syn design is a result of a singular focus on high performance. The only guiding design principle was to make a road bike that delivers real life aerodynamic and riding performance beyond that of any mass start road bicycle to date, without sacrificing rider comfort.

“We use the “real life” adjective to differentiate from high performance in a wind tunnel or ideal test conditions.” said Victor Major, CEO and R&D Director of Velocite Tech. “For example, real life use of a road bike always involves carrying water bottles, and to date no bicycle design delivered optimal aerodynamic performance once water bottles are mounted.”

Velocite Syn frame design and profiles, in particular the down tube, were developed to achieve stable airflow even when water bottles are mounted on the frame. The special profile along with a recessed water bottle mount presents a favourable pressure gradient across a wide angle of attack range. This lowers the aerodynamic drag and minimizes turbulence.

Velocite used custom developed CFD software running on an in house computational cluster. “Having our own CFD software and hardware liberated us from continually watching the costs of our research and development, and allowed us to run many high level simulations and open ended investigations.”, said Victor. “CFD is now used as a marketing buzzword to signify that some high level research and development took place. Thus, it is important to note that not all CFD simulation is done equally well, and even if it was done well it does not mean that the results were used to significantly improve the product design. Often the bicycle design is driven by the marketing influenced industrial design, not functional design imperatives,” said Victor.

The Velocite Syn is also the stiffest aero road bike in the market, with the high end version exceeding the stiffness of the highly regarded Velocite Magnus frame. This was achieved by taking advantage of the frame profiles, as well as high-end manufacturing and layup techniques. The larger than usual carbon fiber plies are laid up and compacted over frame specific solid mandrels, not bladder or foam preforms, prior to curing.

Comfort is improved by using a standard round profile 27.2mm seatpost, and a hidden recessed clamping design with a polymer damper. The recessed clamp accentuates the seatpost flexing, while the damper serves to mitigate some of the high frequency road buzz.

The Velocite Syn will be formally launched at the 2015 Taipei Cycle Show, booth number L0401a.

Established in 2009, Velocite is a multiple industry award winning manufacturer dedicated to making high performance bicycles, bicycle frames, wheels and components. Velocite is a company focused on achieving engineering excellence where the first and foremost priority is to apply the relevant engineering and scientific principles when developing new products in order to deliver the best riding experience. Since 2012 Velocite has also contributed R&D, design and ODM services to bicycle brands in major markets.