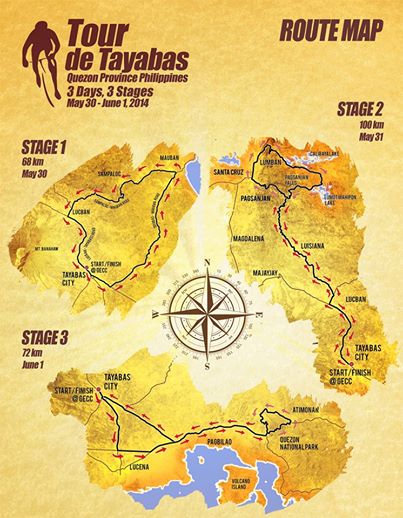 going into the first ever edition of the  3 day Tour de Tayabas (May 30th-June 1st) hosted by the rather swish Gracelands Estates Country Club in the Quezon Province of the Philippines, i had extremely low expectations. normally i’m cocky/confident/stupid enough to think i can grab a stage win at the least but this time i was looking to just get through safe and sound and for my face not to explode.

i might have to explain that last comment. on the evening of the 14th of May i felt what i thought to be a small, deep pimple growing just under the skin on my right cheek. thinking nothing of it i climbed into bed early, intending to get up early for a long training ride.

by 2am i still couldn’t get to sleep. the pimple felt bigger. on a trip to the toilet i glanced in the mirror and got a little bit of a shock – the right side of my face was visibly swollen and even though it wasn’t painful i immediately went into Man Panic Mode.

allergic reaction? i hadn’t eaten anything dodgy nor been stung by anything or taken any medication. there was this soft sponginess to the swelling that wasn’t making me feel any better about the fact that i was losing my chiseled jawline! what was worse was that it seemed to be starting over on the left side of my face too now.

in a proper wide-eyed panic now i could’t get to sleep, so waited up til 6am then headed to the hospital. after an hour of sitting there with a face that was starting to attract stares for all the wrong reasons – and it was really starting to hurt now around my jaw and under my ears – the doctor quickly decided that i must be grinding my teeth when i sleep.

‘what?’ i barked, making no attempt to hide my incredulity at such a slack-arsed diagnosis.

‘yeah, it happens because of the humidity and the change in temperature…’

absolute bollocks! i walked out of his office without waiting for my prescription (it’d probably have been a horse-bit for me to wear at night) and headed to another hospital, one that i’d heard was the best in town. by now my face was massive. it was literally getting bigger by the minute.

‘WTF’ was all that was going through my mind. then i made my biggest mistake – i googled my symptoms.

never, ever self-diagnose. within minutes i was sure i had Hodgkin’s Lymphona. certain. i was going to die. by now my jawline was seriously hibernating, and from the (disappeared) chin up i looked like a 500lb champion cake eater.

my throat was completely dry and i was on my third liter of water in two hours, my ear canals were closing up as was my trachea, making it almost impossible for me to swallow. i googled ‘face’ ‘swollen’ ‘cheeks’ and ‘chipmunk’ and got horrible results, tales of people living with massive, bloated faces for years on end, unwilling to go outside, left virtual prisoners in their own homes.

and of course, eventually, i go to the motherload – the Big C.

my own lymph nodes in my neck were hard and swollen to the size of ping pong balls. as i entered the next hospital young children began to weep on sight of me, mothers shielded their offspring’s eyes. i’m sure i heard someone call out ‘oh! the humanity!’…

even the doctor let out an audible exclamation when he looked up from his keyboard to see this distended face perched on a skinny-arsed cyclist’s body. you know when the doctor says ‘ooooh!’ that things are Just Not Good.

i was in some serious pain by now. he booked me to see an Ear Nose & Throat guy later in the afternoon and prescribed three rounds of antihistamine with IV antibiotics to try to bring the ballooning under control. i laid there for 8 hours on a gurney in a hallway in the basement of the hospital and made peace with the world.

i was a goner.

cancer of the face.

going to be buried in a weird-ass shaped coffin.

i figured there was still too much i hadn’t done, too many people to call and too much junk to give away, but that i had put in, on balance, a pretty decent shift on this blue planet of ours.

finally i was jarred from my blue-hued reverie by an nurse and was taken to see the ENT guy.

‘hmmmmm!’ he let out as i walked into the room. the sight of me brought him some perverted sense of professional glee. another bastard.

he stuck a camera up my nose and down my throat. no damage, just a little inflammation.

‘nothing to be worried about,’ he said.

‘but Doc,’ i mumbled, ‘where’s my face and when is it coming back?’

he put it down to a stone in the saliva gland which had caused an infection and got the nodes working overtime. my blood test showed a white blood count of 12,700, some 2,700 over the acceptable limit but nothing to really worry about.

i headed home at 7pm. by 9pm the swolleness was down to half what it was. by 11pm it was almost gone. i missed the next five days from training due to some serious antibiotics and had to cancel a potentially lucrative stage race in China as a result, but holy heck was i relieved, like, times 20,000…

then i got a mail about the Tour de Tayabas running just a week later. i had to get riding again and needed to escape Taiwan’s rainy season, so booked a flight the next day for Manila.

the first day i got there, just 5 days before the race, i did 100km in blistering heat and was shot by the end of it. the next day i did 120km and was again blasted by the effort. by day 3 i was feeling better but still a good 4kg over even acceptable race weight, but no longer aching after the ride.

the next day i took off, then had a light spin the day before the race, and then went and won the 70km 1st stage after a 15km solo breakaway effort that started when the lead group of 5 plus me hit a one km unpaved section. harnessing the lessons i learned on the Roubaix cobblestones back in April, i pout the hammer down and got a 50 meter gap and never looked back after that.

boom! as they say somewhere where i don’t live. but anyway – BOOM!

next day i screwed up and let a guy get away and claw back 54 seconds on me – the sneaky so and so had changed his kit from all black to day-glow pink and blue and i didn’t recognise him from the previous stage. anyway, still i was leading and had 9 seconds, which was better than the other way round.

next day was the hardest of the lot with a killer 3km climb up huge switchbacks that knocked the stuffing out of me, but the 2nd placed guy could do no more than gap me by 50m over the top. with 35km still to go it wasn’t enough for him to hurt me, and a group of about 20 soon formed after the downhill.

i held on to the end and won the GC and the sprints competition, and have to thank my friend Mark Cook, who was there riding for another team, for sitting on the front over the last 10km and riding hard to discourage attacks. great ride by Mark, who also won the 2nd stage after an 80km breakaway.

and so, there it was. brilliant! from the gurney and face ache beyond belief to the top of the podium in just 7 days! just goes to show that if you are training right even a week or two off can’t really hurt.

anyway, i’m still smiling. and i can still see my jawline!

*i’d like to thank the organiser Ric Rodriguez, Amylou and the folks at the Graceland Estate Country Club for outting on this great event, fully recommended.