this article originally appeared on The Roar 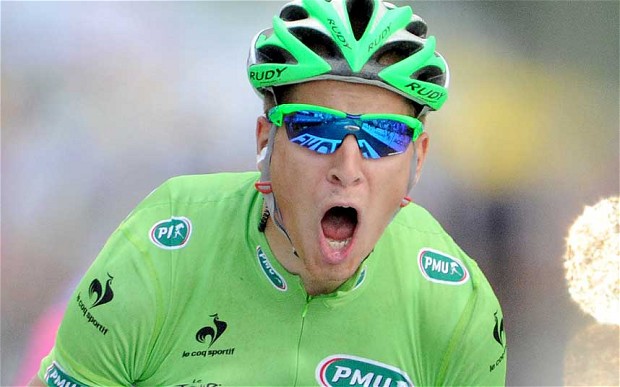 There are a couple of anecdotes about Peter Sagan that tells you just how precocious the 24 year old from Slovakia was as a teenager.

Having started racing bikes at the age of 9, he had already made a name for himself by turning up to road races wearing normal shorts and t-shirts, riding an MTB with a pair of tennis shoes on his feet – and still winning.

Later, as a junior racer he entered the Slovak Cup, but after selling his mountain bike he was left without a replacement as his team’s sponsor couldn’t get his new bike to him in time. Faced with racing on any bike he could get his hands on or not racing at all, he borrowed his sister’s supermarket special – and carried on to win the race anyway.

I’m an admirer of Sagan and have been since he turned up at the EPO Tour of California in 2010 and won Stage 5 & 6 and carried off the White Jersey for Best Young Rider and the Points Classification for good measure.

Here was a guy who looked like the real deal, and you could see that anyone who had that build yet could still climb a bit and win uphill sprints must be packing some serious firepower in his legs.

He didn’t remind me of Boonen nor of Cancellara but more of Bernard Hinault and Laurent Fignon, perhaps even with a bit of Sean Kelly thrown in there too. He was reminiscent – and still is – of those riders before the days of the Lance Armstrong ‘inspired’ specialization, when these tough nut all-rounders threw themselves into every kind of race they could get their hands on, and quite often won too.

And if his riding style conjures memories from another era, that pinching of a podium model’s backside after the Tour of Flanders just compounded that. It was a sign of immaturity, and it’s one that extends to his riding too, which I’ll get to in a minute.

Sagan is so good that many commentators started tipping him as a future Grand Tour winner. He has the flatline speed to become a good time trialist, and the legs to become a very decent climber if he can lose a few kilos of his upper body muscle, but I have to say I am on the fence on that one.

With the kind of specialization we have today, with riders like Chris Froome basing their whole year around one race and turning up with 3% body fat, it’s hard to see Sagan competing for the podium in any of the big stage races any time soon.

But where he can cement a legacy and establish himself as one of the greatest of all time is in the Classics.

Indeed, he might have already started along that path had one or two of the big races gone his way. Instead, he has so far racked up two ‘mini’ classic wins (Gent-Wevelgem and Brabantse Pijl last season), and a whole truckload of close calls.

2012 saw him claim 2nd at Gent-Wevejgem, 3rd at Amstel, 4th at Milan-San Remo and 5th at the Tour of Flanders.

In 2013 he was second at Strade Bianche, 2nd at Milan-San Remo, 2nd at E3 Harelbeke, and 2nd at the Tour of Flanders.

This year, he was again 2nd at the Strade Bianche and 10th at Milan-San Remo.

One of Sagan’s problems – and he has very few it seems – is that sometimes he is just too good and doesn’t know what to do with it. In some races, like the recent Strade Bianche, Sagan took off so fast and at a point when only one other man could go with him that he effectively handed the race to Michal Kwiatkowski.

Alessandro Valverde has a saying that goes like this:

“When you are not strong, take a chance. But when you are strong, do nothing until the end.”

Of course, we love to see swashbuckling riders who take big chances and give it everything, but that game is a little hit and miss. If Sagan could pull back his natural instincts just a fraction I think he would win even more races.

Strade Bianche was a case in point. Cancellara said afterwards that from the get go it was obvious that Kwiatkowski was on a flyer. Did Sagan not see that too? Or did his natural egotism get the better of him? Perhaps Kwiatkowski would have won no matter had there been 30 riders at the finish, but Sagan carried him to the line on a finish that suited the Pole rather than him.

Sometimes in bike racing you have to be prepared to lose it all, to win.

That Sagan is one hell of a Classics rider is not in dispute. Neither is the fact that, if he wants to win at Flanders or Roubaix this season, he will have to usurp two of the best Classics riders of all time: Fabian Cancellara and Tom Boonen.

Not just good, these too, they are truly great riders, proper legends in an era when so many have fallen by the wayside. When they roar, the peloton listens, for they are lions of the peloton.

Can Sagan be as good?

Judging simply from wins and age, he is actually doing better than Cancellara was at 24. In 2005, at the same age Sagan is now, Cancellara had in terms of Classics’ results one 4th place at Paris-Roubaix to his name.

In terms of big wins in big races such as the Tour de France, Sagan is way ahead on that score too (Sagan has 4 already, Cancellara has 8 in his career to date).

Cancellara though had won Roubaix by 2006 when he was 25, the first of his three wins. His record since has been one of the best in the modern era, with two Flanders wins, one Milan-San Remo and four victories at the E3 Harelbeke.

He’s looking good this year too despite a sluggish start that saw him not at his best in the Middle East. Last week’s 2nd at San Remo though will have buoyed him and indicated that he is near top form.

Then we come to Boonen. At the age of 22 he was third at Paris-Roubaix. By 24 he had won Gent-Wevelgem and the E3 Prijs Claanderen, the Points Jersey in the Tour de France and two stages there too. 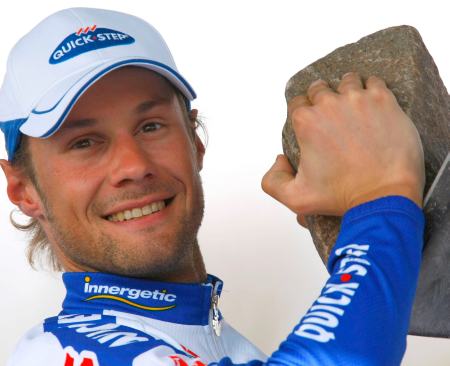 By 25 he was World Champion, and in the same year won Flanders And Paris-Roubaix. His one day classics palmares is unrivalled even by Cancellara, with 4 wins at Roubaix, three at Flanders, three at Kuurne-Brussels-Kuurne, three at Gent-Wevelgem, five at E3 Prijs Vlaanderen and a host of smaller wins too.

On paper Boonen is the best Classics rider of his generation and absolutely one of the best of all time. Cancellara’s wins may be more spectacular, generally, but it is Boonen who has the numbers (Boonen’s tally at the Tour by the way is 6 stage wins).

It is these two men that Peter Sagan will come up against in the following weeks as he strives to claim his first Monument Classic win.

Cancellara is firing and Boonen had been having another great start to the year until the still-birth of his first child last week forced him to miss Milan-San Remo (and I’m sure all out thoughts go out to him and his partner at this time).

But, Boonen is already back on the road and determined not to let his training over the winter go to waste.

And so, can Sagan win at Flanders or Roubaix?

No, not this year. Barring an accident to the other two, I can’t see him winning on firepower alone. Perhaps if he could manipulate a situation to have them negate each other, maybe, but for one, the Swiss and the Belgian are too experienced to fall for anything but the con job of a master and for another, Sagan just isn’t smart enough yet to do that.

There is also the fact that the skills of Boonen and Cancellara mean that Sagan comes up lacking, if ever so slightly, in comparison. Boonen has a far greater wealth in experience of conserving energy for the sprint at both races and can go it alone too, when on his absolute best form. Cancellara of course can go it alone from just about anywhere, even if at 90% against most riders.

There’s no doubt that Sagan is very, very good, but he has some way to go to be considered in the league of Boonen and Cancellara, and he’ll have to wait another year at least to claim a win at either Roubaix or Flanders.