anyone who knows the racing scene in Asia won’t be surprised that there are so-called ‘illegal’ crits springing up here and there, most get no bother and are out of the way so as to not annoy any of our friendly car-bound fellow folks.

when there are almost no races being sanctioned by the cycling federations here, people have to do that they gotta do to get a decent ride in.

however you may be surprised to learn that organisers in Singapore of one of these unsanctioned crits have been arrested – unless you are actually from Singapore.

this is a place that every year has trouble putting on its own national road and time trial champs, and this year will have none at all as the authorities will not allow for the road closure.

it was bad enough that the nationals were set on short, straight and flat stretches of road that saw the riders doing something like 44 u-turns in the road race just about every year (really were the dullest races I’ve ever participated in, sorry Sing, but it’s true!), but that the sport was deemed not only so minor but actually troublesome (in reality as a mosquito might be troublesome to a rhino) to not even deserve a national champs?

non-cycling Singaporeans have been known to hit the forums to celebrate when a cyclist is killed. i’ve ridden there a few times and have noticed more ‘close driving’ and honking than in other parts of Asia.

news came in today that two guys have been arrested for organising a night race, known as HolyCrit.

the Straits Times reports that the two men, “aged 28 and 39, for their suspected involvement in promoting and organising the illegal racing event under Section 116 of the Road Traffic Act, Chapter 276.

“If convicted, the two men would be liable to a mandatory jail term of up to six months and a fine of between $1,000 and $2,000. In the case of a second or subsequent conviction, they could be jailed up to 12 months and fined between $2,000 and $3,000. The vehicles used in the illegal race would also be forfeited.”

the police seem quite keen to push this through too.

The Assistant Commissioner said that “Traffic Police takes a serious view against illegal racing on public roads and will not hesitate to enforce against irresponsible racers who partake in such illegal activities and jeopardise other road users with their stunts.”

let’s hope sense prevails, as 12 months seems a heck of a punishment for putting on a crit. 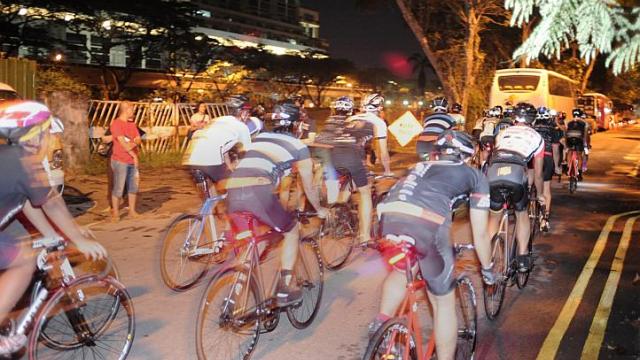